Hermes Trismegistus – Thrice-Great Hermes – and Hermetic tradition, have their origin in the fusion of Greek and Egyptian cultures under the Ptolomies, and in Jewish Kabbalistic tradition. 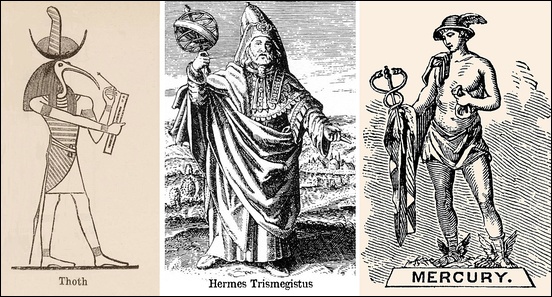 The Greek god Hermes (Mercury to the Romans) and the ibis-headed Egyptian god Thoth merge. Both are gods of wisdom, writing, science, healing, astrology, and magic; both are psychopomps, guiding souls to the afterlife.

Today Hermetic philosophy teaches the unity of the Cosmos and the Self, the mystical interconnection of all things, an identity of the Divine both without and within.

The Painting’s Symbols:
– The triple face represents Hermes Trismegistus, vanquisher of the Dragon of Ignorance.
– The nine crowns are the angelic Crowns of Life.
– The seven-branched menorah, represents Israel, called to be “a light unto the nations” (Isaiah 42:6). G-d tells Zechariah that the menorah is a reminder: “not by might nor by power, but by My spirit” (Zechariah 4:1-6).
– The seven flames are the seven eyes of G-d (Zachariah 4:10), a metaphor revealing a secret: G-d overlooks and judges creation from seven perspectives corresponding to the seven attributes of the heart.
– The pair of sacred ibis flanking the menorah allude to Thoth.