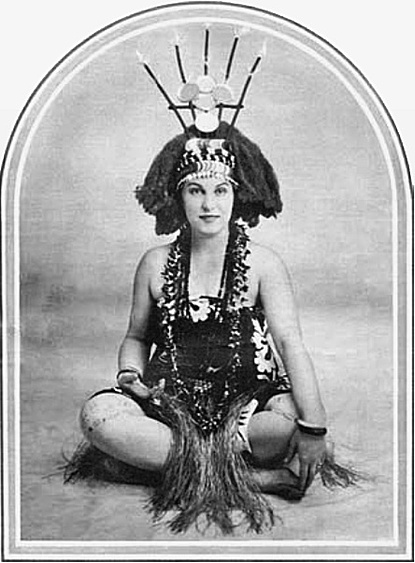 On Bothwell’s return to the United States in the early 1930s, she promoted herself as an expert on native culture in advertisements, newspaper articles, and programs.

Claiming to be the foster or adopted daughter of Chief Sotoa, wrapped in tapa cloth and wearing the elaborate headdress featured in the Los Angeles Times, [Dorr Bothwell] lectured about everyday life in Samoa and performed for audiences in clubs, lounges, and ballrooms in San Francisco and Los Angeles.

She found employment as a muralist with the New Deal art projects, taught classes, exhibited work, won fellowships, founded a gallery, and published a book. …[S]he married and divorced. And she traveled.

Indeed, Bothwell led a peripatetic life after her trip to Samoa, visiting the Caribbean, England, Western Europe, North and West Africa, Asia, and the American Southwest. As did her stay in the South Seas, which inspired much artwork and imbued her with an ability to work and look across cultures…

Bothwell carried Samoa with her as she circled the globe, and later in life, she experimented with Polynesian barkcloth patterns in her sketchbook. Like her tattoos, the tapa served as a [touchstone for] her extraordinary stay in the South Sea Islands.